When I turned on my new tablet a year ago, I was alerted that because I resided in Canada, I would have to return it to the store. Apparently the model I bought was American, you see, and I would need the Canadian model. I asked why I wouldn't be able to use it, but was told condescendingly that it was obviously because I had purchased the wrong model. How stupid of me. But I wouldn't be able to return my American model at the store; in fact, I would end up having to travel to six different stores before being able to return my laptop and buy the proper model. 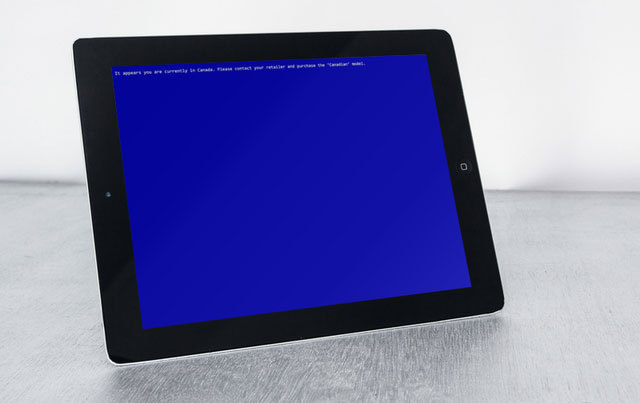 It's probably apparently from my doctored image that this is never happened - but things like this happen all the time in customer service environments; for some reason, companies and people seem to have a different set of standards for customer service than they do for products - and that's ridiculous.

Just now, in fact, Best Buy routed me through five different operators just to validate my Best Buy warranty on my laptop. Even disregarding the constant degradation of voice quality as I kept being transferred, I had to hold on the line and explain my situation again to every person I spoke to. Yes, I hung up on the fifth transfer, and tweeted angrily. This is where it gets even better:

It's wonderful that so many companies have adopted social media strategies, but there seems to be gaping chasm of quality between companies that do it well and those that don't. I suppose the latter is valid if the end goal is to pretend like you care rather than actually help customers, but in my opinion, it's best to avoid situations like this: 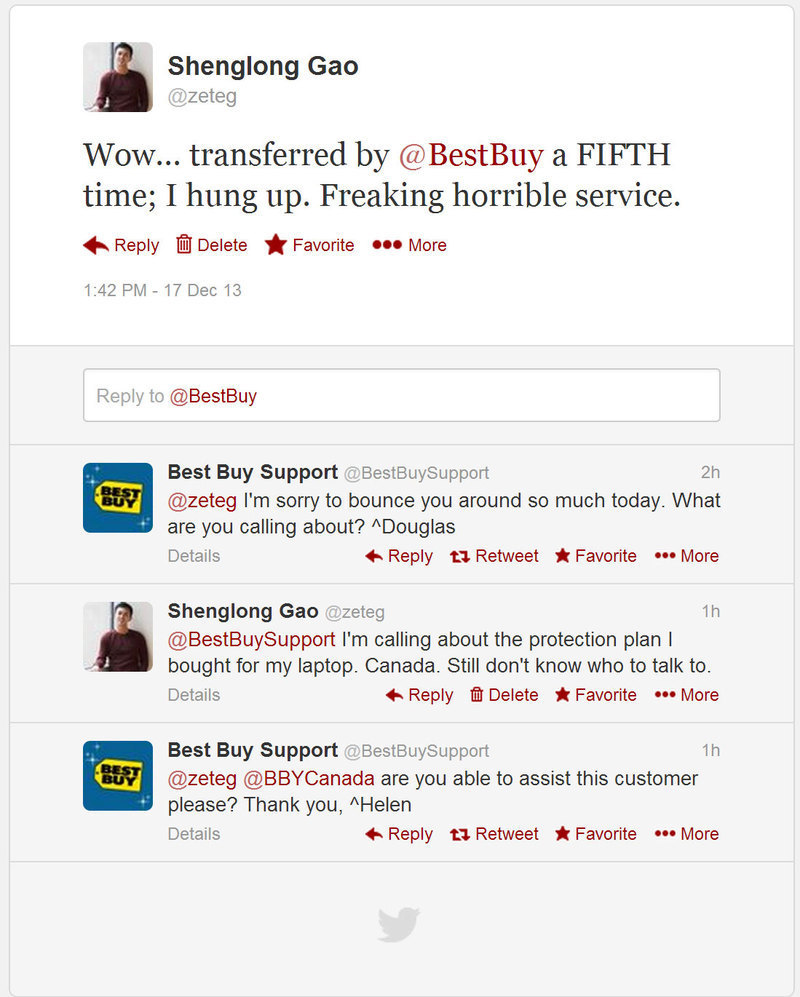 After apologizing for bouncing me around too many times, Best Buy's Twitter guys somehow decide the optimal way to proceed is to bounce me again to another twitter handle. Worse, the new handle hasn't even responded. Brilliant; great communication guys. I'll update this post in the future to reflect my final bounce count before (if) the situation is resolved.

Some companies do social media right, though. Take Pizza Pizza for example, when my friends and I were told my the representative on the phone that "(our) free medium pizza will cost $7.99": 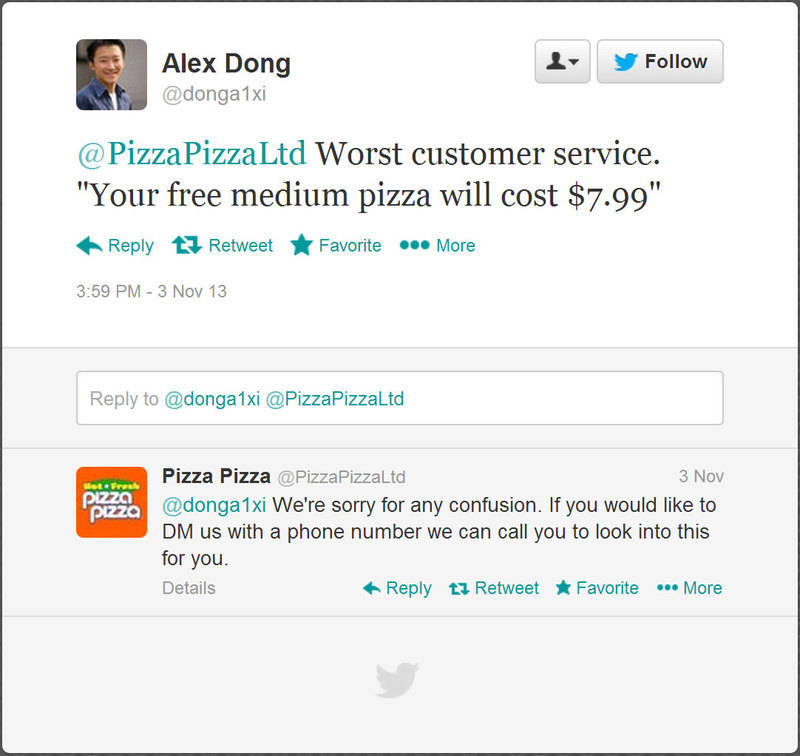 We got a call immediately after we sent them a number, and the lady on the phone quickly resolved the issue. Her concern wasn't who was right or wrong; her concern was satisfying us--the customers. In reality, we didn't care about $10, but we we shared an universal hate for wasting time and being treated unfairly. Even though I'm not a giant fan of Pizza Pizza pizza, I've eaten there a few times since, each time remembering the wonderful service I received.

What does this have to do with producing customer service like a product? It all comes down to design--understanding what the customer wants, and translating it into the experience. Reduce friction, maximize happiness, and associate your service as you would want your product to be seen.

As a customer, it shouldn't be my responsibility to figure out that Best Buy Canada is a separate entity from Best Buy, and that my information in one does not necessarily transfer to the other. While I am sure this is the case, I just don't (and shouldn't have to) care.

This is an easy one. Collect your average call times per employee, and figure out how many people are in the queue before the customer in question. Every so often, you should update him or her with the estimated time remaining, and offer to let the customer leave a message instead. If you don't want to display time, at least tell them their position in line.

The Customer Is Never Wrong

I don't believe that the customer is always right--that's impossible. However, you should never make your customers feel like they're wrong. Here's an offensive reply from Air Canada that blames a mother, who tried to bring a real problem to the airline's attention: 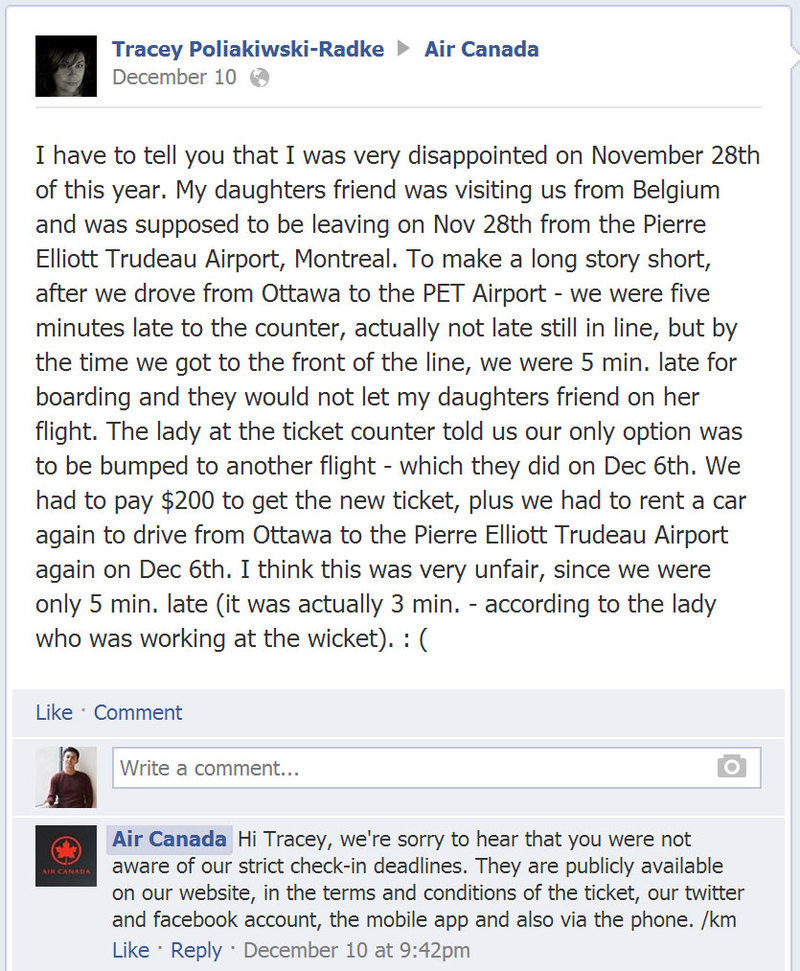 It's almost scary how good Air Canada seems to be at making their customers feel like shit (legal disclaimer: my own opinion). You don't want to do this. In fact, you should document a rough flow of how your employees should deal with wrong customers if you're not paying them enough to be problem solvers. Here's a rough sketch of how I envision it; note that really important nodes are marked in green: 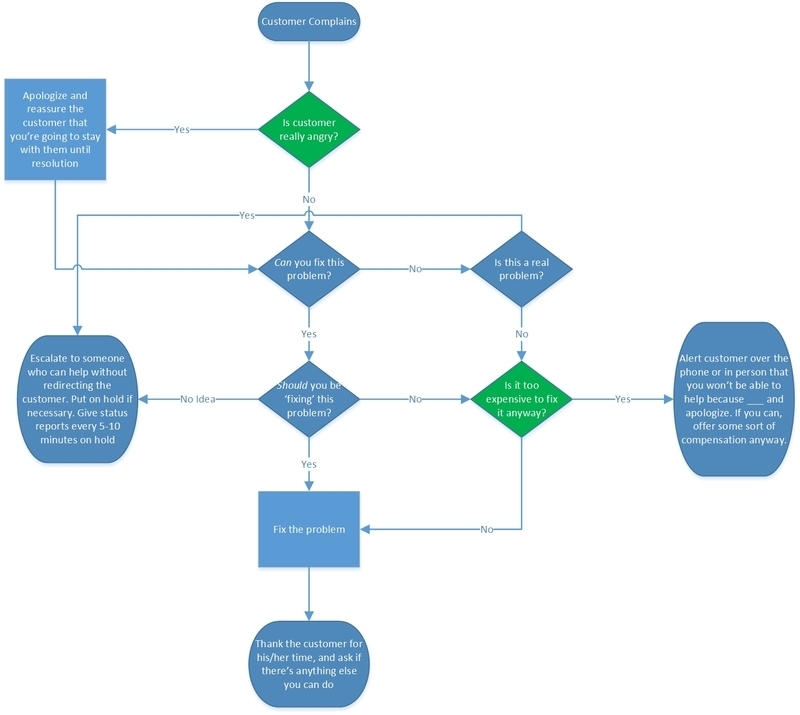 The emphasis here is that you should solve problems if they're not too expensive to fix, even if it's working as intended. You can let the customer know that this is a one-time thing, and the customer will be grateful to you for it. Really though, if you don't make the customer feel worse than when she called, then you're already ahead of the game.

This is harder in practice than in theory. You want to make sure that each part of your company has a limited way to talk with each other. Take Uber for example. After stories like this where customers lost Matt Damon, they developed a basic lost-and-found system to improve operations (image from TechCrunch): 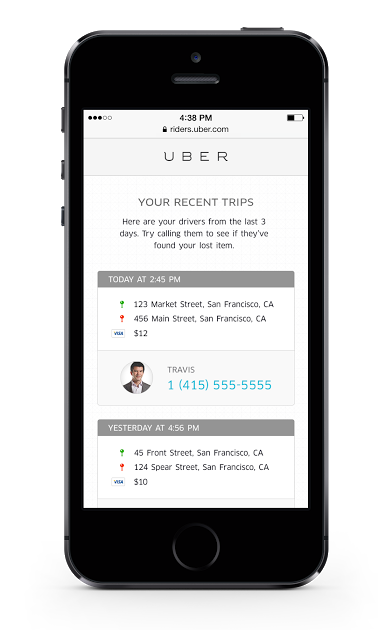 This is a far stretch from one friend's experience with Air Canada. Right after he left the airport, he called Air Canada to tell them he had left his Kindle on his flight. However, he was apparently told that they didn't have the ability to contact the crew. Now Air Canada, that's just silly.

I spent a summer at Dayforce (now acquired by Ceridian) in the Client Support group, where I fielded queries from B2B clients. Though I may be biased, I think it's pretty safe to say that we offered one of the best support experiences I had ever seen - probably due to the smart people working there, and the experienced management. We tried to solve problems even when they weren't entirely relevant, stayed late when a client's case required it, and even thought of alternative strategies to tackle problems. The most defining feature, though, is that we never blindly forwarded a customer off. We always called that person in advance to explain the situation and get them up to speed.

A customer shouldn't have to repeat herself twice (much less 5-7 times), a taking a few seconds to do that for her will make a world of difference.

Another defining feature of our Dayforce support team was our freedom to communicate. We weren't confined by narrow scope, and if we believed something the client is asking for is entirely reasonable, we forward a request or talk to someone in development. This is entirely unlike some companies like AT&T.

I interned at Microsoft last summer in Redmond, Washington, and so I paid for a plan with AT&T. Even disregarding their premium prices and other problems, I had to call more than five times to even pay them. Each time they (CS rep or manager) would ask for my credit card number, followed by a "zip code". Unfortunately, Canadians have postal codes instead of zip codes, and their system can't seem to process a postal code. Each time I was told I'd get a call back once they figure it out, and I never would. Instead, I received condescending messages alerting me of my delinquency.

In fact, it wasn't until I threatened to chargeback my card for the initial deposit and file a complaint with the FCC that they finally fixed my problem. Even such a simple problem of country-based conditional fields took months to figure out.

If an issue is legitimately escalated, then there should be a way to make sure it's looked at. You're not going to account for all the problems that can arise, and it's reasonable to learn from your customers. It makes them happier, and it makes you smarter.

With all this said, it's also important to understand the role of customer service in any business. Sometimes providing good customer service is just not economical (Google), or--if your cost of new customer acquisition is significantly close to retention--not entirely justified past a certain point. Take Admiral Insurance, a car insurance provider in the UK, for example:

I worked at the Admiral Insurance call center in Halifax, Nova Scotia for a few months, on the phones as inbound sales. I was told that Admiral put their Sales center in Halifax partly because Brits found Canadian accents to be endearing, and Canadians accents performed better in up-selling to their target demographic. At the same time, Admiral put their customer service department in India. To ensure people didn't get too angry, customers would get switched back to Canada to the Retentions department if they wanted to cancel their service.

I always found quirks like this to be fascinating. Despite the moral objections people may have, operations set out like this shows a solid understanding of the underlying business (at least one model - even if I disagree). I distinctly remember one gentleman whose first words to me were, "You're not in India, are you?" I replied that I wasn't, and he sighed relief. After he explained his problem to me, though, I regretted to inform him that as per company policy, I would have to forward him to India. They probably could have trained me in customer service as well, but would it be worth the costs? Would it be the right thing to do? These are questions that every company needs to answer for itself.

The important thing is to be cognizant of your decisions, and not let them be made for you.